Elizabeth Dulemba serves up a hot chili of a new book! Today, I'm pleased to host the incredibly smart & talented Elizabeth O. Dulemba on the first day of her blog book tour for her gorgeous new book Paco and the Giant Chili Plant, which will be released on April. The book is a clever, bilingual retelling of "Jack and the Beanstalk."

I love to hear how illustrators come up with their creations, so "e," (as we like to call her) has agreed to respond to my nosy questions!

So e, tell me: Did you do any special research to capture the Mexican flair of this book?

(Maybe munched a hot chili or two? LOL!) I've never been to the American Southwest except for layovers in the airport so I did have to do considerable research. I did a lot of looking around online (especially in the National Archives), joined some message boards for specifics, and looked at maps. I pulled images into a folder so I could look at them later (never to copy directly, only to get the feel of something). The main thing that struck me during my research was I needed the light to feel warm and spicy. The sun is much stronger in the Chihuahuan Desert, which is where Paco takes place. And as far as eating chiles - por supuesto (of course)!

How did you do those luscious end papers? Do you just create one illustration, then reproduce it in Photoshop?

I used to work for a children's clothing manufacturer so am somewhat comfortable creating patterns for repeat, which is what I did for the endpapers. I also just plain have a thing for endpapers. They can introduce a mood and relay story information in a completely different way. To me, blank endpapers are a missed opportunity to play!

What is your process for capturing the essence of a character? Lots of sketches, or do you get a feel for the look of a character as soon as you read the manuscript?

My research gave me an idea of the kind of clothes Paco might wear, but for his face, I did a lot of sketches. Once I nail it (usually some scribbled image in the corner of my drawing pad) my challenge is to see if I can do it again and again. I have to be able to carry the character in all sorts of poses through the entire book. It can be challenging!

Are all of your illustrations created from your head, or do you use models? How about other objects like houses and plants? Do you work from life at all?

I mostly work from my head, and only use visual reference if I'm not sure what something looks like (like a yucca plant for example). I've found that when I use models or set-ups, my work may be more accurate, but it tends to feel a bit flat. I like the slight wonkiness I get from dreaming up images on my own.

I'm always fascinated at the way illustrators add details which are not in my text. Did you incorporate any little "inside jokes" or subtle details in your illustrations that are not mentioned the text? Something we can look for besides the obvious showing of the action in the text?

Of course! My dog, Bernie, once again makes an appearance. He's been in all my books so far. When I read to kids, I love them to shout, "Hi, Bernie!" whenever they see him...which would actually scare him to death. He's quite shy!

Thanks for those interesting answers, e! Here are the particulars of the book:

Wednesday, catch up with "e" at Janee Trasler's Art & Soul. Janee's latest book is "Ghost EAts It All!"

And now, in honor of e's delightful new book, (and since it's still winter) I'm including a recipe for Tasty Tortilla Snowflakes, which as you can see are fun and pretty as well as yummy. A great kid recipe! 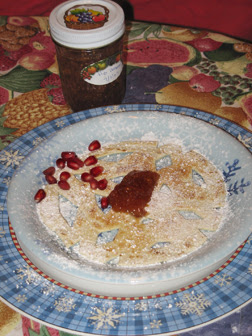 Directions:
Wrap the tortillas in a paper towel and microwave a couple of seconds until they are just warm. Using the same technique as cutting out paper snowflakes, fold the tortillas in sixths and cut out snowflake designs. Put a touch of oil in a pan and fry each tortilla until crisp. Top with one or more of these yummy toppings:
• Sprinkle it with powdered sugar or top it with fruit or jam.
• Spread butter on one side of the tortilla, then sprinkle lightly with cinnamon and sugar.
• Use bologna, turkey, ham, cheese, etc. and make a snowflake sandwich.
If you prefer to bake the tortilla snowflakes, preheat the oven to 350 degrees. Brush the tortillas with milk and then bake for five to 10 minutes until golden brown.

Nice interview and what a cool idea for recipe. I can't wait to do that - would make a cool after school snack too. I'm so used to just throwing some shredded cheese in the middle, folding over and baking until the cheese melts for a basic quesedila. Very cool - I'm going to try snowflakes now - E :)

Yes! Yummy quesadillas! (How DO you spell that?) Love 'em, even though I'm supposed to avoid wheat, still gotta have my quesadillas now and then. Sometimes I sprinkle in a few chopped green olives. Double yum!... if you don't mind the extra salt.

Fun idea and I love the fact that you used a snowflake dish for presentation. Great interview and loved the information. Thank you for sharing this.

Thanks, Kathy! I guess you've maybe still got some hope of snow left in the forecast out there in Colorado, but I think it's time for us to give up the dream here. Sigh. Winter can be so boring in the south!

MY LATEST BOOK: I KNOW A WEE PIGGY! 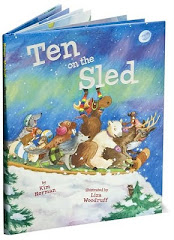 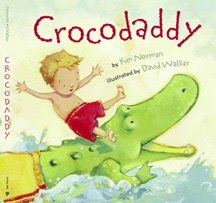 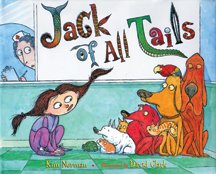 Kim Bookwriter
My Website I'm a children's book author whose books have been featured in The New York Times, Scholastic Book Fairs and Children's Book of the Month Club. I also employ my 20+ years of musical theater experience in my school visits. Turns out being a ham can actually be a useful skill!